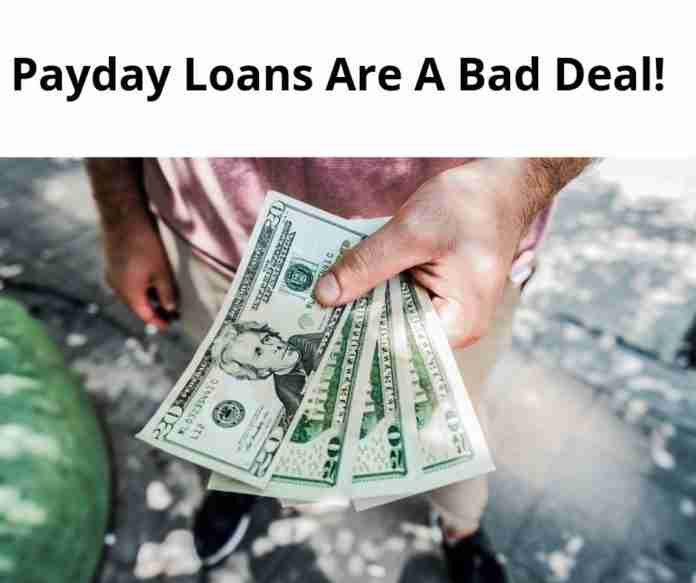 Payday loans advertise themselves as a way for you to score quick and easy cash without having to fill out a bunch of paperwork or having to go through a formal loan process. They have fewer credit requirements and are far more lenient with the application process than getting a loan from a credit union or bank. While this may sound like a godsend, payday loans are actually a nightmare, as they keep you engrossed in a continuous cycle of debt. Learn the truth about how do payday loans work.

How do payday loans work?

Payday lending is a multibillion dollar industry with 11 percent of Americans taking out a payday loan over the past year. Payday loans are cash advances on your future earnings. These are short-term and low balance cash loans, with incredibly high rates of interest. Payday lenders typically have physical locations with many offering online lending.

Payday lenders often require proof of income in the form of paystubs or direct deposit. Payday lenders allow you to borrow money based on a post-dated check that is cashed on the borrower’s upcoming payday. Your wages operate as the collateral for the loan. The amount of the check is for the total loan, which includes interest. Some lenders allow electronic transfers of funds on paydays. Payday lenders typically lend out between $300-$1000. Your loan funds may be distributed in cash, check, or a prepaid debit card.

Typically, these loans are due within a couple of weeks from the date you take out the loan. The average payday loan is for approximately 14 days. The lender gives you cash in return. When the loan is due, the lender takes out payment directly from the bank account. You can ask for an extension up to a couple of weeks, but extra fees are charged in such cases.

How to qualify for payday loans?

According to the Consumer Financial Protection Bureau, or CFPB, you need to meet the following conditions in order to qualify for a payday loan:

The qualification and loan application process can be very fast (under half an hour) if you can show that you fulfill all requirements. Generally the borrower writes a check which includes the loan amount and lending fee, which the lender keeps until the predetermined due date. Qualifying loan amounts vary based upon the lender’s requirements and borrowers income but most states have laws in place that rigidly set maximum payday loan amounts.

Please understand all aspects of payday loans before you begin the application process, or you will have problems later on.

The Truth About Payday Loans

Payday loans are predatory loans that prey upon cash strapped financially vulnerable individuals who are desperate for a cash infusion. Payday loans are a rip-off. These “loans” are not subject to ordinary interest usury restrictions which financial institutions have since they are considered short term in nature. Very few states cap the interest on payday loans and even those states allow a 36 percent rate which is still astronomical. Most states allow payday lenders to charge usury level rates. Payday loans rates in most states ranges between 300 -700 percent in interest. The average annual percentage rate on a payday loan nationwide is an insane 400 percent! (Find out why bad credit loans are a better alternative).

Look at the 10 states with the highest annual interest rates on payday loans.

The level of interest that these states charge makes it almost impossible for most people to escape payday loan hell. Payday loan borrowers find themselves caught in an endless cycle of constantly taking out new payday loans. Payday loans are the enemy of those seeking to learn how to get rich.

Let’s say you take out a $600 loan in Ohio at 677% interest for two weeks. You would owe $756.23 just two weeks later paying $156.23 in interest for that loan. If you don’t have the full payment, you can roll over or renew the loan by paying the $156.23 in interest. None of the $156.23 fee applies to the principal of the loan. Two weeks later, you will still have to pay the original $600 in principal and an additional $156.23 in interest. If you still are unable to pay the full $756.23, you can keep renewing the loan every two weeks by paying the $156.23. Renewing the loan just four times will have you paying $623.92. You would have repaid more in interest than the original loan amount. The average payday borrower renews their original loan over and over again taking several months to pay them off. Many borrowers take out new loans to scrape up the cash to be able to pay off the old ones.

Most payday lenders also require you to give them access to your bank accounts allowing them to withdraw money on a specific day. They know that most borrowers will be unable to repay their loans in a two week time frame. This often leads to overdraft charges from banks and additional fees from the payday lender for insufficient funds. A payday loan can have you not only owing your lender money but your bank as well. If your payday lender chooses to fund your loan on a prepaid debit card, you are subjected to additional fee charges every time you use your prepaid debit card.

Payday lenders do not care about your financial situation and will do everything possible to receive every dime they have charged you. They will garnish your wages, destroy your credit score, and harass you until the money is fully repaid. Payday loans are definitely not worth the hassle. I would gladly take a credit card cash advance or take a bad credit loan against an asset before subjecting myself to the predatory practices of a payday lender.

What Is An Angel Investor?